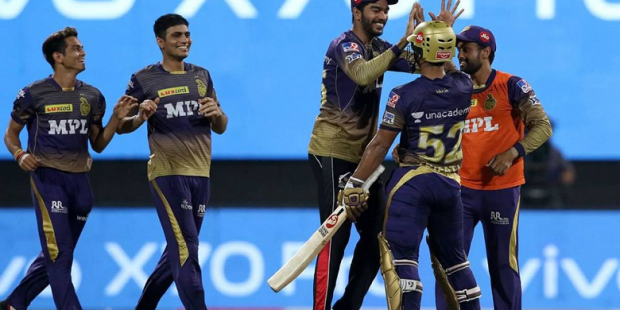 It is the Kolkata Knight Riders who will fight against Chennai Super Kings in the final of the Indian Premier League 2021. Rahul Tripathi hit a six on the second last delivery of the match to script a memorable 3-wicket win for KKR over Delhi Capitals in the qualifier 2 on Wednesday.

KKR skipper, Eoin Morgan won the toss and asked Delhi Capitals to bat first. Shikhar Dhawan and Prithvi Shaw gave Delhi Capitals a decent start with the bat. The duo added 32 runs in the first four overs. However, Varun Chakravarthy put the brakes by sending Shaw back to the pavilion at 18 on the very first ball of the fifth over.

The Capitals played a gamble by sending Marcus Stoinis on number three. However, the move didn’t work and the Australian all-rounder had to go back after adding just 18 runs. This was followed by a few quick wickets for the KKR contingent. Though Dhawan and Shreyas Iyer showed some form with the willow, they failed to accelerate their innings.

Dhawan was the highest run-getter for DC with a knock of 36 runs as they ended up with 135 runs on the scoreboard in their 20 over. Shimron Hetmyer should be loaded hitting two valuable sixes in the end and helped the team add something to chase.

For Kolkata, Varun was the pick of the bowler with two wickets to his credit. Shivam Mavi and Lockie Ferguson also had one each to their name.

Chasing 136, Kolkata Knight Riders got off to a blistering start. The opening pair of Shubman Gill and Venkatesh Iyer caused carnage on the field. Iyer smashed 55 runs off 41 deliveries while Gill also added 46 runs to the scoreboard. A 96-run opening stand in 12.2 overs put KKR in a commanding position in the chase and made them the favourites to win.

However, it was the same old story for KKR in the middle overs. There was another collapse of Kolkata’s middle-order as the team soon went from 96-0 to 129-5. It was brilliant bowling by Delhi Capitals as all the five bowlers lived up to their reputation and hardly gave anything away while picking timely wickets.

In the end, the equation boiled down to KKR needing seven runs off six deliveries. Ravichandran Ashwin had the ball in his hand with Rahul Tripathi and Shakib Al Hasan in the middle. Ashwin showed exceptional skills in the final over as he took two back-to-back wickets in the form of Sunil Narine and Shakib.

However, in the end, it was KKR who had the last laugh as Rahul Tripathi managed to hit on the second last ball to win the game for KKR.