There are seven great races on the card at the Cheltenham Festival on Wednesday with the Champion Chase the highlight, however the so called undercard isn’t too shabby either with some seriously good horses going to post.

Among the support races are the Ballymore Novice Hurdle, the Champion Bumper which looks incredibly tasty while a living legend bows out in the Cross Country. We’ve gone through the non-handicap races and come out with bets in two of them.

Wednesday’s opener has attracted just the 9 runners & we have an odds on favourite for this in the shape of 2021 Champion Bumper Sir Gerhard.  He is the class horse in the field & a repeat of his hurdling form to date will see land this prize but there are questions to be answered.  Firstly, this is his first try over further than 2 miles & the extra half mile at a course like Cheltenham will take some getting.  Add to that there are other front runners in this who will surely try to run the finishing kick out of him, he’s no certainty.  The other concern is his hurdling as he was a bit sloppy when winning at Leopardstown & surely won’t get away with it here.  His nearest market rival is Three Stripe Life who was beaten by today’s favourite last time out & it’s hard to see him turning the tables unless the longer trip suits.   Best of the Brits is Paul Nicholls’ Challow Hurdle winner Stage Star who will likely go very well but it’s concerning that the winner of that race has a terrible record in this & despite it’s Grade 1 status, this year’s Challow was definitely sub standard.  I Am Maximus could sneak a place at a bigger price in a bid to extend Nicky Henderson’s good start to this year’s Festival & he does have form here but has a lot to find on ratings.

I’m sticking with the Irish & siding with Journey With Me.  This likeable 6 year old is unbeaten in his 4 race career so far including both his hurdle runs.  On hurdle debut at Leopardstown in December, he won what was surely the best maiden hurdle run all year, with Minella Crooner back in 2nd & yesterday’s Supreme 3rd, Kilcruit a further place back in 3rd.   He had to be ridden to go clear but did it well & his battling qualities will serve him well in this.  Last time out at Naas on deep ground, he didn’t run as well in a lower grade race but still won with the minimum of fuss.  What has impressed me on both runs was the way he picked up under the whip to put the race beyond doubt.   Also, in his early hurdling days, his jumping has impressed too.  With a real lack of obvious alternatives to the favourite & the fact he has won over this trip, he looks a very good each way selection to kick off the day.

Open up a BetVictor account during the Festival and bet £10 on any race to get £40 in free bets PLUS 50 free spins! Click the image below to take advantage of this fantastic offer! 18+ T&Cs apply Gamble Aware. 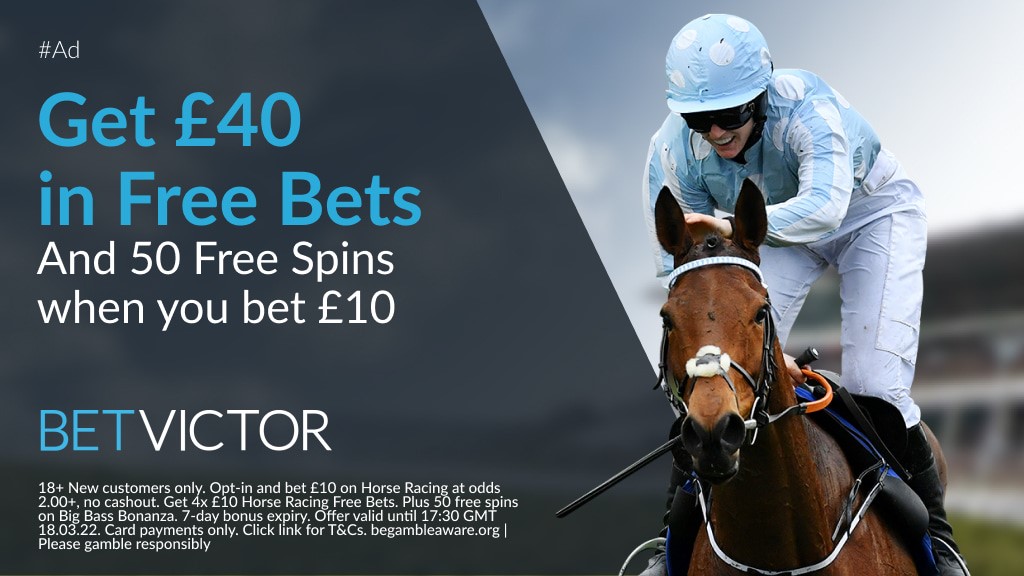 This looks to be a cracking race with the 2 expected to fight out the finish behind Bravemansgame & L’Homme Presse.  The former is 4 from 4 over fences & amongst that he landed the Grade 1 Kauto Star at Kempton.  He was also a top class hurdler finishing 3rd in last year’s Ballymore.  His claims are very solid & I think he’ll go very close.  The same can be said for Venetia Williams’ gelding L’Homme Presse who boasts an identical 4 from 4 record over fences, the most notable victory being in the Scilly Isles at Sandown.  It’s hard to rule either out with confidence especially as they both have course form.   Of the others, Lucinda Russell bids to add to her winner on Day 1 with Ahoy Senor.  His record is 2 from 4 having unseated on debut & then finished behind Bravemansgame at Kempton; I just don’t see him turning the tables, especially at this track.  Capodanno is the nearest market challenger to the front 2 & he’s a progressive 6 year old but arrives here after unseating at the DRF in February.  Gigginstown run 3 & all appear to have similar chances but none totally convince.

At a big price, I’m taking a chance on Gaillard Du Mesnil.  As a hurdler, he was arguably the best of these & finished 2nd to Bob Olinger in last year’s Ballymore.  What was obvious to me after that was that he’d benefit from being stepped up in trip but in his 3 chase starts to date, he’s not gone further than 2 miles 5 furlongs.  He’s still a maiden over fences which is a concern but his form isn’t all bad.  He was odds on when overturned in a beginners chase on debut, finishing 2 lengths behind Capodanno & was then 3rd again behind that same horse & Bob Olinger next time out but the really soft ground didn’t suit him as much as others.  However, he did show some improved form last time out at the DRF when 3rd of 8 to the top class Galopin Du Champs & would have potentially challenged for 2nd but for pecking on landing over the last.   Conditions look to be ideal & if my view that 3 miles plus will suit him, he looks way overpriced & even if he isn’t good enough to overturn the top 2 in the market, he might prove best of the rest.

Back Gaillard Du Mesnil (e/w) in the without Bravemansgame & L’Homme Presse market for a 1/10 stake at 8.00 Betfair Sportsbook (⅕ odds 1-3)

One of the best spectacles of the week but just not a betting contest for me.  It would be great to see Tiger Roll record a 4th win in the race & he’s been backed as if that’s likely.  I’m not going to oppose him but think Prengarde & Shady Operator should both run big races.

This is another race I’m not just interested in.  The best strategy is to side with Willie Mullins but given he has 7 runners & 5 of the first 6 in the market, I’m not sure that’s very helpful.  I’ll be keeping my powder dry in this, ready to attack the last 2 days of the meeting.