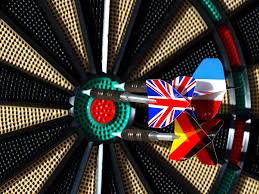 It is the final day of the German Darts Championship on Sunday with the last 16, quarter finals, semi-finals and the final all being played out on what could be a very special day of darts as the second European Tour event of the season draws to a close.

As ever in these kind of events we won’t have the time between sessions to preview the latter stages of the competition but we do have a couple of outrights left in who will hopefully progress to give us some interest. We’ll go through the last 16 matches here though.

It isn’t very often that we see Michael van Gerwen on show first up in a session but that is the case on Sunday afternoon. He meets the surprise package of the competition in Martin Lukeman who took out Damon Heta on Saturday. When they are done the world champion Peter Wright will be on show. He faces the Polish ace Krzysztof Ratajski before Ryan Searle and Dimitri Van den Bergh meet for the second weekend in succession. We head to the break on Sunday afternoon with Michael Smith meeting Dave Chisnall in another great looking game.

There are four good matches in the second half of the afternoon session with the first one after the break seeing Joe Cullen taking on the former winner of this event in Daryl Gurney. When they are done one of our pre-tournament picks Jonny Clayton takes to the stage. He meets Mensur Suljovic before our other outright bet goes up when Dirk van Duijvenbode takes on Rob Cross. The final match of the afternoon sees the number one seed Jose de Sousa going up against Karel Sedlacek for a spot in the quarter finals.

I’m largely hoping my outright bets progress in this session, especially as I’m still licking my wounds after Kim Huybrechts lost from 5-3 up surrendering match darts in the process to cost me a winner on Saturday. I will go with one bet here though which sees Ryan Searle to beat Dimitri Van den Bergh, just like he did at the UK Open last weekend. That extended Searle’s head to head lead on the Belgian to 5-2 which is promising.

Van den Bergh is a class act but something seems to be missing in his game in terms of a spark at the minute. He is never truly reliable on the doubles either which is a further concern. I guess you could say similar about Searle but he has gotten a lot better on them and the confidence of making his first televised final towards the end of 2021 has certainly raised his levels. Searle had a good win over Vincent van der Voort on Saturday where his scoring was incredibly strong. A repeat of that makes him tough to beat at a more than fair odds against price.