At around 5.15pm today, we’ll see the 174th running of the world’s greatest steeplechase, the Grand National.  It remains a true test of stamina, the longest race run in Britain, with a distance of just over 4 miles 2 furlongs and the 40 runners will have to negotiate famous fences like the Chair, Bechers Brook & Valentines.   Last year’s winner, Minella Times, is back again bidding to emulate the great Tiger Roll with back to back wins in the race but it would be some achievement given his weight & handicap mark this time around.  Owner JP McManus also has 4 others running in his colours whilst trainer Gordon Elliott has 7 running for him.   Following on from our horse by horse guide, we are taking 3 bets.

Open up a BetVictor account for the Grand National and bet £5 to get £10 in bonuses plus a £1 FREE BET FOR 20 WEEKS! Click the image below to take up this great offer for the big race! New customers only. 18+ T&Cs apply. Gamble Aware. 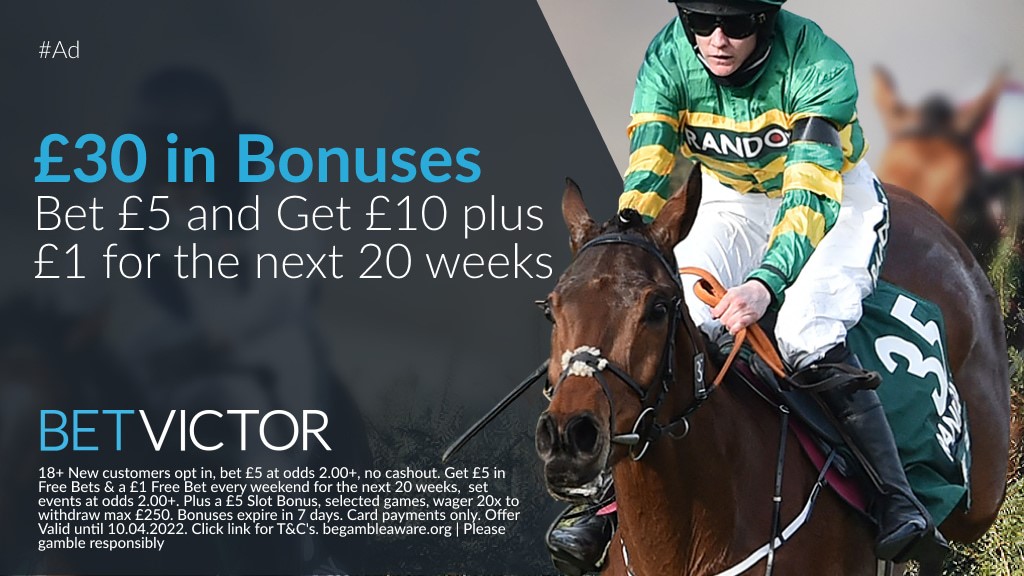 The first of those is Enjoy D’Allen, one of the McManus runners.  He has the ideal profile for this in that he’s experienced enough yet still lightly raced over fences, has great form in big fields and has the perfect racing weight of 10st11lbs.  In his 10 run chase career, he’s never been out of the first 3, over trips ranging from 2 miles 4 furlongs to 3 miles 5 furlongs.  In amongst those are 3rd place finishes in two 28 runner handicaps, the Irish Grand National & the Paddy Power Chase.  He ran a super race in the Irish National behind a pair of today’s rivals & arguably bettered that in the Paddy Power.   In both races, he was taken off his feet at times but stayed really well suggesting the extra distance could be right up his street.  Whilst much of his form has been on soft ground, those 2 runs were on good / good to soft so there will be no ground concerns.  Interestingly, he’s been lightly campaigned this time around & it’s had the sort of prep reminiscent of one that’s been laid out for a tilt at the big one, having had his last run over hurdles where again he ran with credit finishing 5th of 24 at Leopardstown.  You need a bit of luck to win the National but if he gets that, everything else looks in place for a massive run.

Lurking at the foot of the weights is Eclair Surf and he has massive claims.  Just the 9 chase starts to date but that’s resulted in 3 wins, and he definitely has the form in the book.  He’s had 4 starts this year & has not stopped improving.  Still travelling well on seasonal debut, he fell 3 out and then ran well in the Welsh National trial when making a crucial mistake 5 out but perhaps more importantly becoming outpaced.  After that, it was clear that marathon trips might be his thing so it was pleasing to see him step up to 3 miles 5 furlongs for a crack at the Grade 3 Classic at Warwick.  He won a 15 runner handicap as comfortably as you like, by 13 lengths, and the form could hardly have been franked more with the 4th Corach Rambler & the 2nd Gericault Roque finishing 1st & 2nd in the Ultima at Cheltenham.   Proving that was no fluke, he ran in the 4 mile 1 furlong Eider Chase at Newcastle & arguably improved again to finish just over a length 2nd to Win My Wings, a horse that has subsequently gone on to win the Scottish National off a 8lb higher mark.   Purely on form lines, he rates an excellent bet.

Despite letting down his backers at Cheltenham, I cannot leave Run Wild Fred unbacked.  11 runs over fences and just a sole win to his name but he has finished 2nd on no less than 6 occasions so is ultra consistent & maybe today will be the day he bags that second victory.  In his first season chasing, he put up some cracking efforts, notably when 2nd in the  Thyestes & then 2nd again in the Irish National behind a 150/1 winner.  He’s arguably contested a different kind of race this season, finishing runner up in a trio of novice chases.  In his one other run, he won the Troytown, again proving his liking for big field handicaps.  It’s probably worth noting that in his 3 handicaps over fences, his form has been 2-2-1 in the 18 runner Thyestes, 28 runner Irish National & 16 runner Troytown.  His best RPR has come on good ground despite having lots of form on heavy whilst his next 2 best RPRs have come over the longest 2 distances he’s faced (3 miles 5 furlongs & 3 miles 6 furlongs) with neither of those run on worse than good to soft.   He does have a big weight but if he gets the required luck, he’s surely another that will go very close.