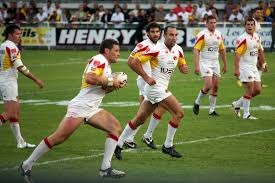 We continue to countdown to the end of the Super League season on Friday night when another two matches take place and each of them will have a determination on the makeup and order of the top six.

As always on a Friday night we have a match on TV and one away from the cameras with the coverage likely to have regular updates of the one which the cameras aren’t focusing on throughout to keep us up to speed with everything going on.

The televised match on Friday evening comes from Craven Park where Hull KR take on Leeds Rhinos in a clash with huge implications for the play-offs come the end of the campaign, not least because these two sides sit ninth and sixth respectively with just one point between them.

That means whoever wins here will end the night in the top six of the table and be on course to extend their season. The loser will need to overcome the deficit with just four matches remaining so the very least we can expect here is a competitive affair. I would have been on the side of the Leeds Rhinos if this match was last week but Hull KR have got two or three key men back and Leeds are missing three who are all suspended so all of a sudden the difference between the two sides could be much less. I still fancy Leeds to have that bit of extra class to get over the line but whether they cover six points in a match where just winning is the aim I’m less sure. I’ll watch this one rather than risk a handicap tie.

The match away from the cameras sees two sides who are hugely likely to be playing knockout rugby once the season is done meeting at The Jungle where the Castleford Tigers play host to the Catalans Dragons.

These two sit fifth and fourth heading into the week and the reward for the Dragons will be to move into third place overnight. Castleford currently sit in fifth but they are only two points ahead of ninth so they need to keep winning to secure their berth in the postseason. A win here would be hugely beneficial to their chances but Liam Watts and Cheyse Blair being out isn’t going to help Lee Radford’s men. Castleford go into this match off the back of two straight defeats where they have scored just 18 points and were particularly awful in the first of those losses against Wakefield a fortnight ago. Despite a bunch of injuries, Catalans have won two of their last three and only went down to the Leeds Rhinos in extra time in between. Although those two wins weren’t convincing in the score stakes to win with the players they had out was encouraging. They get Dylan Napa, Joe Chan and Matthieu Laguerre back for this one so will look a lot stronger.

These two have shared their two matches this season. The Dragons powered to a win in France then went down in golden point at The Jungle. Catalans were without Laguerre and Sam Kasiano among others that day while the missing Blair got a try for the Tigers. I think with a little more positive form and players back both on the side of the Dragons they are a shade of value to win this.

Back Catalans Dragons to beat Castleford Tigers for a 3/10 stake at 2.05 with Betfred