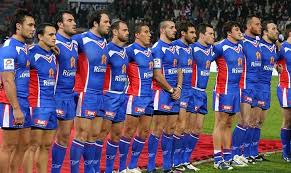 The current Super League weekend has already been full of drama and tension and it continues on Saturday afternoon when another two matches take place on a day where we might get to see a potential challenger showcase their credentials.

One of the two matches are live on the TV for us to watch and then there will be various social media updates as well as the radio commentaries for the other match on a day where terrestrial TV puts Super League in the spotlight once again.

The opening match of the afternoon is the one which is on TV and it sees two sides in Warrington Wolves and Wakefield Trinity battling it out with both teams looking to offer up something convincing after an up and down beginning to the season.

The Wolves won their opening three matches, although they weren’t always as convincing as they would have liked to be, but have lost two straight going into this one, although it should be said both defeats were to the two teams who met in the Grand Final last season. Wakefield lost their opening four matches and while they were competitive in a number of them they still went down in them. To be fair when they met St Helens and Catalans Dragons they put up a decent showing and only narrowly went down. That makes me cautious about backing Warrington to cover 14 points in this match but if they get on a roll they could easily cover that line. The bet I like here is for Matty Ashton to score two or more tries at 5/2.

Wakefield concede an awful lot of tries down their right hand side. Ash Handley scored a hat trick against them a couple of weeks ago while Tommy Makinson has a double against them. Both Fouad Yaha and Samisoni Langi scored against them for Catalans and generally Daryl Powell sides have no issues shifting the ball left, especially with the handling qualities of Ben Currie. Matty Ashton is the left winger but he’s 8/13 to go over once. Given the amount of tries that come down the Wakefield right I think almost four times the odds on him to go over twice looks decent value, especially as he notched in two of the three games prior to the defeat to St Helens last week and with Josh Charnley suspended on the other side.

The match which isn’t getting the TV attention on Saturday afternoon is the one which comes from France as the bottom placed side Toulouse Olympique meet the champions St Helens in what is a real David vs Goliath contest.

Toulouse have threatened to look good a couple of times this season but they will swap looking good for Super League points. You would have to say they are extremely unlikely to arrive here though because St Helens look invincible right now. If there is a concern over Saints it is that one or two injuries are beginning to crop up which might impact their fluency if not their results. I still think Saints will win this match and I certainly wouldn’t be surprised to see them cover a 26-28 point handicap but if they are good enough to do that I’m happy to see it without sweating on them doing it.