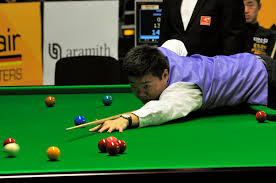 We are down to the semi-final stage at the Turkish Masters in Antalya with both the matches taking place on a sizzling Saturday of snooker. When the last ball is potted on the day we will know which two men will battle for the inaugural title on Sunday.

We are guaranteed a top 16 vs non-top 16 final because one of the semi-finals sees two men from the elite bracket meeting while the other sees two on the outside looking in going at it. Both our outright bets are still standing so we’re dreaming of a guaranteed winner in the final.

The opening semi-final of the tournament sees the two men outside the top 16 going at it when Matt Selt bids for a place in another major final when he takes on the Chinese superstar Ding Junhui, who is thankfully showing that talks of his demise were premature.

To be fair to Selt, he has come through the draw nicely this week. You could argue that his quarter opened up when Mark Selby pulled out of the tournament but he has still had to beat the likes of Martin Gould and Zhao Xintong on his way to this semi-final. Selt has scored well this week and looks like he is finally delivering on the promise he showed at the UK Championship and Scottish Open earlier in the season. Ding though offered up signs of a revival in Newport last week and he has built on that here. He has overcome the likes of Kyren Wilson and Si Jiahui this week and is scoring like the Ding of old. I’m already on Ding at 8/1 for this match courtesy of backing him outright before the tournament began and I’m confident he’ll settle faster and come through this one so I’m happy to let that one ride.

The second semi-final of the day is the more marquee one as two Triple Crown winners collide when Shaun Murphy takes on Judd Trump in a match which could be spectacular if both offer up their best form, but could be no less intriguing if they don’t.

Trump could be forgiven for wondering how he is still standing in this tournament given that he was 4-1 down to Liang Wenbo and 4-3 down to Zhou Yuelong earlier in the week, only to survive on both occasions. I guess the same applies to Murphy with regards to him being 4-3 down to Oliver Lines in the quarter final but prior to that it had been largely plain sailing for the world finalist of last season. I’m convinced Trump is waiting to be put out of his misery. The same thing applied last week and eventually Joe Perry did it and I’m hoping Murphy follows suit because I’m effectively on him at 16.5/1 here having backed him before a ball was hit this week. There is the school of thought that Trump improves as a tournament goes on which is a fair point to make but at this stage last week he trailed Hossein Vafaei 5-3 before the Iranian failed to put him away. If Murphy gets into that position I’m a lot more confident he’ll win this match but I think the better bet is for ‘The Magician’ to make the highest break here. Since his held over qualifying match, Trump has made one century all week which is a sign of his struggles. Murphy is looking more and more fluent as the week goes on and the 7/5 he outscores his opponent here appeals.