Chennai Super Kings will play yet another final in the Indian Premier League on Friday. This is the ninth occasion in 14 editions when CSK will be appearing in the final of the cash-rich tournament. MS Dhoni and Co. will be squaring up against Kolkata Knight Riders, who are coming into this game on the back of outstanding performances in the knockouts.

Last year, Chennai Super Kings finished second from the bottom of the points table, having managed to secure only 6 wins in 14 matches. Ahead of the 2021 edition, many pundits predicted a similar result for CSK. However, MS Dhoni and Boys proved each and everyone wrong as they finished the league stage at second position.

They are coming into this contest on the back of a four-wicket win over Delhi Capitals in Qualifier 1. On a rare occasion, the bowling attack lacked discipline. A good batting surface made things worse as Delhi Capitals posted 172 runs in the first innings. Josh Hazlewood was the only bowler who looked good as he took 2 wickets for just 29 runs in his four overs.

Their scorer in chief, Ruturaj Gaikwad played yet another scintillating knock to set the foundation of the chase. After Faf du Plessis got out on just 1 run, Gaikwad and Robin Uthappa stitched a match-defining 110-run partnership for the second wicket.

Ruturaj scored 70 runs off just 50 balls, while Uthappa scored 63 runs off 44 deliveries. Despite the partnership, CSK found itself in a spot of bother in the middle overs as wickets fell in quick succession. However, MS Dhoni’s three fours in the final over ensured CSK cross the finishing line with two balls to spare.

On the other hand, Kolkata Knight Riders too wouldn’t be short of confidence. They are coming into the contest on the back of two morale-boosting wins against Royal Challengers Bangalore and Delhi Capitals in the Eliminator and Qualifier 2 respectively. Shubman Gill and Venkatesh Iyer’s superb form has been the biggest positive for them.

The team would expect them to give another solid start. The lower middle-order’s poor run is a concern though. The likes of Morgan and Dinesh Karthik need to step up with the bat. KKR’s strength will remain in their bowling unit. All the five bowlers (three spinners and two seamers) have been excellent this season. Varun Chakravarthy was the pick of the bowler in the last game, finishing with figures of 2 for 22 in 4 overs. Sunil Narine starred for them with both bat and ball against Royal Challengers Bangalore.

Ruturaj Gaikwad to be the highest run-scorer for CSK in the match: 7/2 @bet365

The kind of form this guy is in, you shouldn’t think of any other batsman to bet on. He has been sensational this season and is currently the second-highest run-scorer (603 runs in 15 matches) in the tournament. Ruturaj Gaikwad is just 23 runs short of surpassing KL Rahul, who currently leads the run charts.

Shardul Thakur to be the highest wicket-taker for CSK in the match: 11/4 @betway

Shardul Thakur has been brilliant in the second leg of IPL 2021 for CSK. He has consistently picked wickets for the franchise and is currently their highest wicket-taker. Thakur has 18 wickets in 15 matches at an average of 27.17.

Shubman Gill to the highest run-getter for KKR in the match: 2/5 @bet365

Gill’s sensational run in the second leg of the tournament should keep the team in good stead. He has three half-centuries to his name in the last five matches. Gill contributed 46 runs in as many deliveries in the last game against Delhi Capitals.

Varun Chakravarthy to pick the most wickets for KKR in the match: 11/4 @betway

Eoin Morgan is going to use Chakravarthy wisely in the final on Friday. He is likely to bowl the difficult overs in the match and could get wickets in return. Chakravarthy picked 2 for 22 in his four-over quota in the last game. 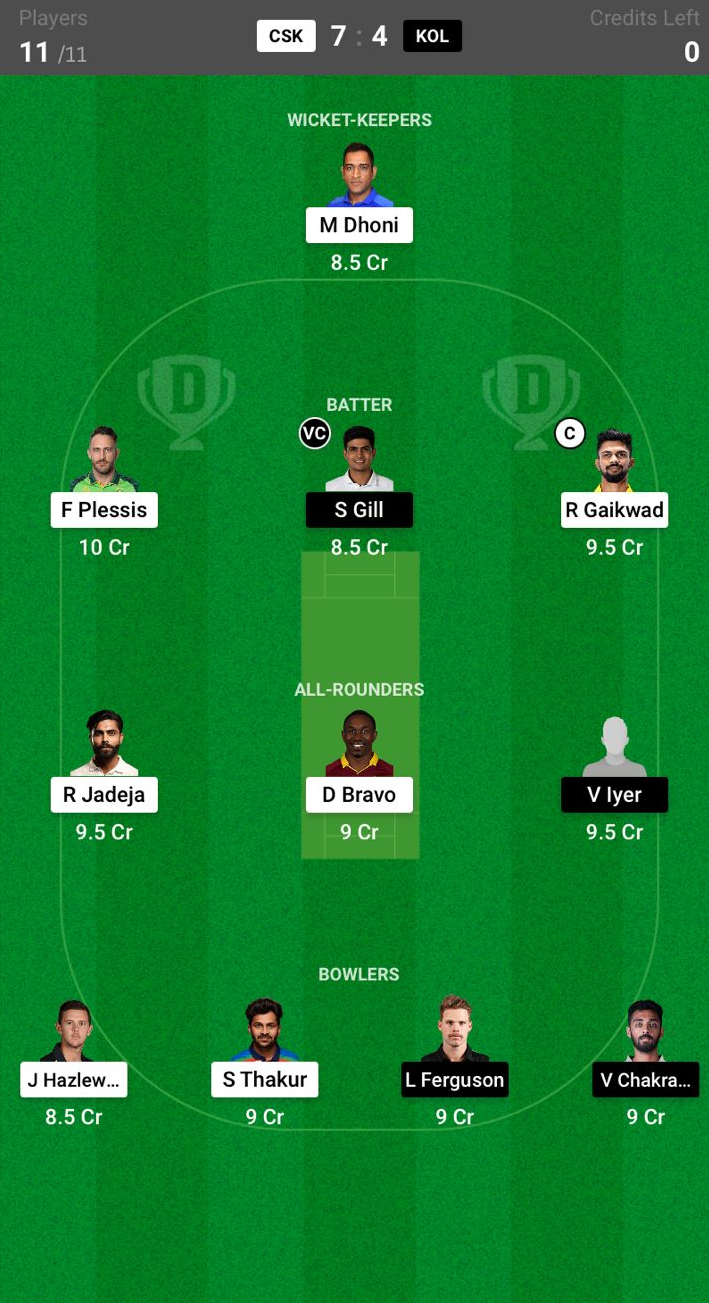 Ruturaj Gaikwad, Shubman Gill and Venkatesh Iyer, Faf du Plessis all are handy pick as captain. All four would open the innings and are in sensational form with the bat.

As for captaincy, Ravindra Jadeja, Moeen Ali or Shakib Al Hasan could be great options to look at. All three are likely to fetch you points with both bat and ball.