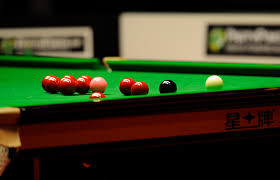 The qualifying competition for the European Masters continues on Friday when another 10 matches take place inside the Morningside Arena in Leicester as we will get another 10 players qualifying for the main draw in Germany next month.

All of the matches that take place across the three sessions of play will be streamed live and in full on the Eurosport App as well as with the bookmakers so we have ways and means of keeping up with all the action.

Jack Lisowski is the highest ranked player on show in the morning session on Friday and he’ll be expected to make it through to the main draw. He has the Chinese player Zhang Jiankang in his way. Another Chinese player is in action on one of the other tables when Zhou Yuelong goes up against John Astley while the other two matches sees Robbie Williams going up against the talented amateur player Steven Hallworth and Ashley Hugill meeting Julien Leclerq in a clash between two players with a good opportunity in front of them.

Mark Allen is the leading light in the afternoon session. After winning his Championship League group on Thursday he will be looking to make progress in this competition as well when he meets the amateur Farakh Ajaib. Two Welsh players are on the other two tables with Ryan Day in action on one of them when he meets Ken Doherty while Jamie Jones takes on another veteran in the form of Mark Davis with the latter having the benefit of an extra match in his Championship League group earlier in the week.

Ali Carter is the highest ranked player taking to the baize in the evening session on Friday. His matches rarely lack profile anyway given all that he has achieved in the game but with him taking on Reanne Evans there will be even more attention on this one. Just two other matches take place in the final session of the day. One of those sees Martin Gould taking on the other group winner in the Championship League on Thursday in Michael White while Chris Wakelin meets Jamie Clarke in the other game.

You would have to think that Michael White has a bit of an advantage over Martin Gould in their match on Friday evening. I don’t just say that because White has a decent enough record over Gould but also because White has already got his season up and running whereas Gould will play for the first time since the World Championship qualifiers in this match. White hasn’t just got his season going, he was actually in action on Thursday so his cue arm will be well oiled.

White didn’t just play in the Championship League on Thursday but he also won his group so he will be carrying a fair amount of confidence into this match with him. He would have been anyway after ending last season qualifying for the World Championship as an amateur, a run which got his tour card back for this season, whereas Gould’s campaign ended abruptly. At their best there isn’t much better these two but with White having had 10 frames on the tables and scoring well for much of the day I think he has enough of an edge to be taken at 11/10.