We are a month or so away from the big Cheltenham Festival which leads us into the flat season and towards the Grand National in the UK but before we get there we will keep our eye in by getting stuck into events out in the UAE.

The action out there is building nicely towards the Dubai World Cup Carnival at the end of next month and it continues with a card at Meydan on Friday which looks a competitive affair. There are a couple of bets that we like.

The only handicap on the card has attracted a field of 16 with the usual Godolphin stranglehold as they have 6 of the runners (7 if the reserves gets in), including 4 of the first 5 in the market.   It doesn’t feel like they have a standout contender so I’m taking a punt on Gabr, from the Doug Watson yard, upsetting the odds.   Now a 7 year old, he was formerly high class when trained by Sir Michael Stoute back in the UK where he was a Listed winner & Group placed, rated 108 at his peak.

Since coming over to the UAE, he’d been lightly raced in 2019 & 2020 but failed to shine off what was proving to be a tough mark but since his mark dropped below 100, his form has improved significantly.  His form this time last year read 7-2-7-3 with each in-running comment noting that he ‘ran on well final 2 furlongs’.  He was stepped up from around a mile to a mile & a quarter on reappearance here last week and again the same comment applied where he ran on well, finishing 4 lengths 7th of 14 in a Listed race.  He was drawn wide that day & has suffered the same fate today but given his hold up style, I don’t expect that to be an issue.  Today, he’s back in class down to handicap company again but is tried up in trip again to a mile and a half.  If he sees the trip out, he could have too much pace for this lot & provided he doesn’t get too far back, I’d be confident of him being the final shake up especially as he’s likely to strip even fitter for his reappearance.  16/1 is too big a price in a race paying 6 places.

Open up a BetVictor account and bet £10 to get £40 in bonuses to use on the upcoming horse racing! Click the image below to take advantage of this great offer! New accounts only. 18+ T&Cs apply. Gamble Aware 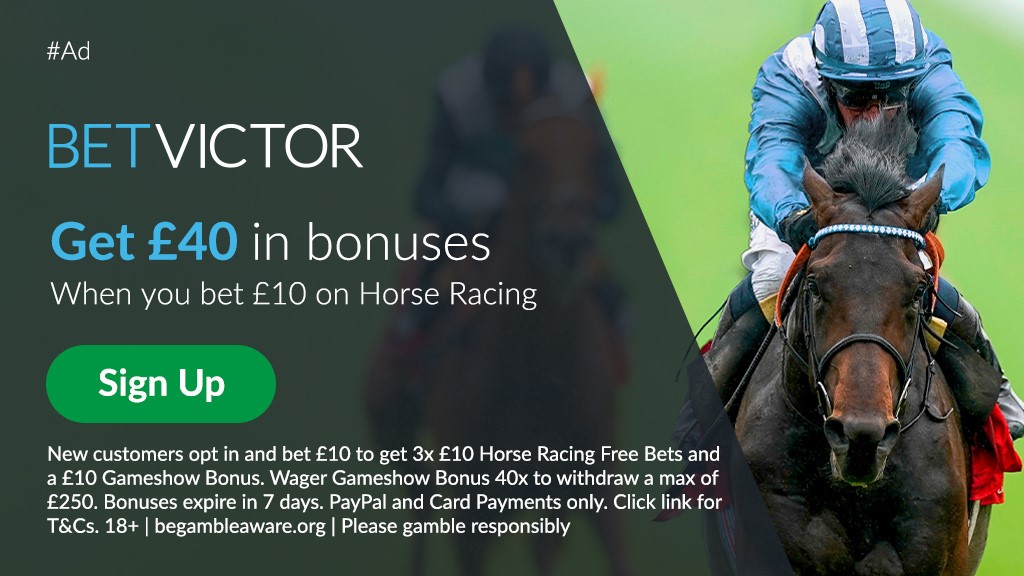 18+ New customers only. Deposit, opt in and place a £10 qualifying bet on Horse Racing at odds of 2.00 or greater within 7 days of opening a new account; excludes cashed out bets. Receive 3x £10 Horse Racing Free Bets, valid on set events only at odds 2.00 or greater. Plus, a £10 Slot Bonus, selected games, wager 20x to withdraw a max of £250. Bonuses expire in 7 days. Card payments only. T&Cs Apply, see below. Please Gamble Responsibly.

The Group 2 Singspiel Stakes is another Godolphin-like trial with 5 of the 12 strong field, all of them in the first 7 in the betting.  The classy Lord Glitters & Alfareeq are the main 2 looking to spoil the party but this time I’m expecting the boys in blue to take home the prize.  However, it’s not Zakouski, Royal Fleet or Art Du Val, the 3 most fancied, that I’m on but instead it’s Frankie Dettori’s ride, Bedouins Story.  Another 7 year old who sprang a shock last year when winning the Cambridgeshire at Newmarket under Jamie Spencer at odds of 40/1 & followed up with a 2nd in the Group 3 Darley Stakes over the same course & distance.

His return to Meydan 2 weeks ago was a bit underwhelming with 5th of 11 in the same grade as today when sent off as the 4/1 second favourite.  He finished behind 3 of today’s rivals but was noted as breaking from the gate awkwardly whilst his jockey said he didn’t ‘feel right’ during the race.  His yard wouldn’t be running him here if he wasn’t firing on all cylinders but on the back of that disappointment, he’s now trading at a much bigger price than you’d expect.  Had he run his usual good race 2 weeks ago, he’d have been close to favouritism but instead odds of 10/1 are available.  Last year here, he won a handicap off a mark of 100 & then finished just over a length behind the winners in a pair of Group events.  Back to that form today & he’s going to bang there at the business end so with 4 places on offer, I just have to get involved.