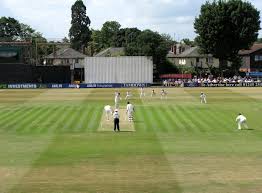 The penultimate round of matches in the LV County Championship begin on Tuesday on a week where there is still so much at stake across what are now two captivating divisions as the red ball season heads towards a close.

We still have to determine who will win the County Championship title, which two teams will be relegated out of the top flight and which two sides will be promoted. The live streams for this competition will allow us to follow all the action.

Surrey retook the lead in the race for the title last week and they know if they win their final two matches they will be crowned the champions. The first of those comes along this week when they host a Yorkshire side who haven’t given up on the season themselves. Hampshire are the only other team left in the race and they are also at home this week. They entertain the Royal London One Day Cup champions Kent who are teetering with relegation. The bottom two meet this week when Warwickshire host Gloucestershire. The latter will be relegated this week even with a win but the home side could do their survival chances the world of good. Somerset aren’t yet safe but they’ll be looking to confirm their safety when they host Northamptonshire. Essex and Lancashire are playing for pride and prize money when they meet at Chelmsford.

Nottinghamshire head the way in the second division and they need just nine points from their top to Worcestershire in order to seal promotion back to the top flight. Middlesex are the other team controlling their own destiny and they’ll be looking to move to the verge of promotion when they head to bottom of the pile Leicestershire. Glamorgan and Derbyshire are the other two teams in the promotion hunt but only one of them will remain in that position as they meet in a huge clash in Cardiff. Durham and Sussex play the penultimate game of their season when they meet at Chester-le-Street in a match which little on it.

Essex have only been beaten once in the County Championship since April and that was at the hands of the leaders Surrey. I was concerned that after the limited overs action they might just play out the season but any thoughts that might happen disappeared last week when they dug in and beat Yorkshire by one wicket in a cracking game of cricket and you wouldn’t do that if you had given up on the campaign.

They now take on a Lancashire side who would be well within their rights to be sulking after losing a second final of the season at the weekend. There is nothing on this match and so it would be human nature to struggle for motivation for it. Essex will be stronger this week because they have Simon Harmer back and they’re at home so they’ll want to put on a decent show for their members. Essex thrashed Lancashire by an innings in the reverse meeting in Manchester earlier in the season when Lancashire had Phil Salt, Luke Wood, Hasan Ali and Jimmy Anderson. None of them are available here so I like Essex in this one.

Back Essex to beat Lancashire for a 3/10 stake at 1.91 with BetVictor