Namibia will square up against the Netherlands in the seventh match of ICC Men’s T20 World Cup 2021 on Wednesday at Sheikh Zayed Cricket Stadium. Both teams are coming off a defeat against their respective opponents and would look to earn their first win of the tournament on Wednesday.

Namibia played their last game against Sri Lanka and were bowled out for a paltry 93-run total in the first innings. They lost their openers early but Craig Williams (29 off 36) and skipper Erasmus (20 off 19) made a decent recovery after that.

However, once both of them departed, wickets fell in quick succession and Namibia ended up scoring a below-par score. If they fancy a win in their next game, the lower order needs to contribute.

Nevertheless, the team would be banking on Craig Williams and Erasmus in the batting department. As for the bowling, David Wiese will be the man to watch out for. He bowled only two overs in the last game but would be hoping to bowl his full quota in the upcoming match.

Namibia started well with the ball in the second innings against Sri Lanka, picking three quick wickets. However, they couldn’t break the fourth-wicket partnership between Avishka and Asalanka and, as a result, lost the game.

“He literally is the heart and soul of this team.” 🥰

It’s safe to say @KNCBcricket all-rounder @Roela52 is a popular character amongst the #Netherlands camp this #T20WorldCup https://t.co/csjC4ZQt6J

Facing them are the Netherlands, who too are coming off a defeat. Another defeat could end their prospect of advancing into the Super 12 stage. Netherland have enough fire-power in the batting unit but none of the batsmen, barring Max ODowd, stepped up in the last game.

The Netherlands opener made a half-century but he lacked support from the other end. The likes of Ten Doeschate, Scott Edwards and Van der Merwe all got out on the very first they faced, thanks to a hat-trick from Curtis Campher. The Netherlands could only manage to score 106 runs in the first innings. Ireland chased down the score in just 15.1 overs.

The Netherlands to win the match: 12/5 @betway

There is no denying that the Netherlands are a far better team than Namibia, given the quality of players they have. The Netherlands have some highly experienced players in their set-up who have the ability to take the game away single-handedly. Given the recent form and team composition of both sides, Netherlands are likely to win the game by a decent margin.

Max ODowd to be the highest run-getter for the Netherlands in the match: 7/2 @bet365

The Netherlands opener scored a crucial half-century in the last game, including 7 fours. While wickets kept falling at regular intervals, he ensured that the runs keep coming from one end. He would be looking to continue his good run against Namibia.

Roelof van der Merwe to be the highest wicket-taker for the Netherlands in the match: 9/2 @betway

The Dutch cricketer proved expensive in the last game but given the wealth of experience he has in T20 cricket, you can expect him to come back stronger. Roelef van der Merwe has 54 wickets in 44 T20 internationals at an average of 18.00.

Craig Williams to be the highest run-getter for Namibia in the match: 2/5 @bet365

Craig Williams top-scored for the team in the last game for side. He has been in fine form, of late and the team would be banking on him to score a significant amount of runs.

David Wiese to pick most wickets for Namibia in the match: 9/2 @betway

David Wiese is coming into the tournament on the back of superlative performances in the CPL 2021. He has a wealth of experience of playing T20 cricket leagues around the world. Wiese bowled only two overs in the last game but is hopeful of bowling his full quota on Wednesday. 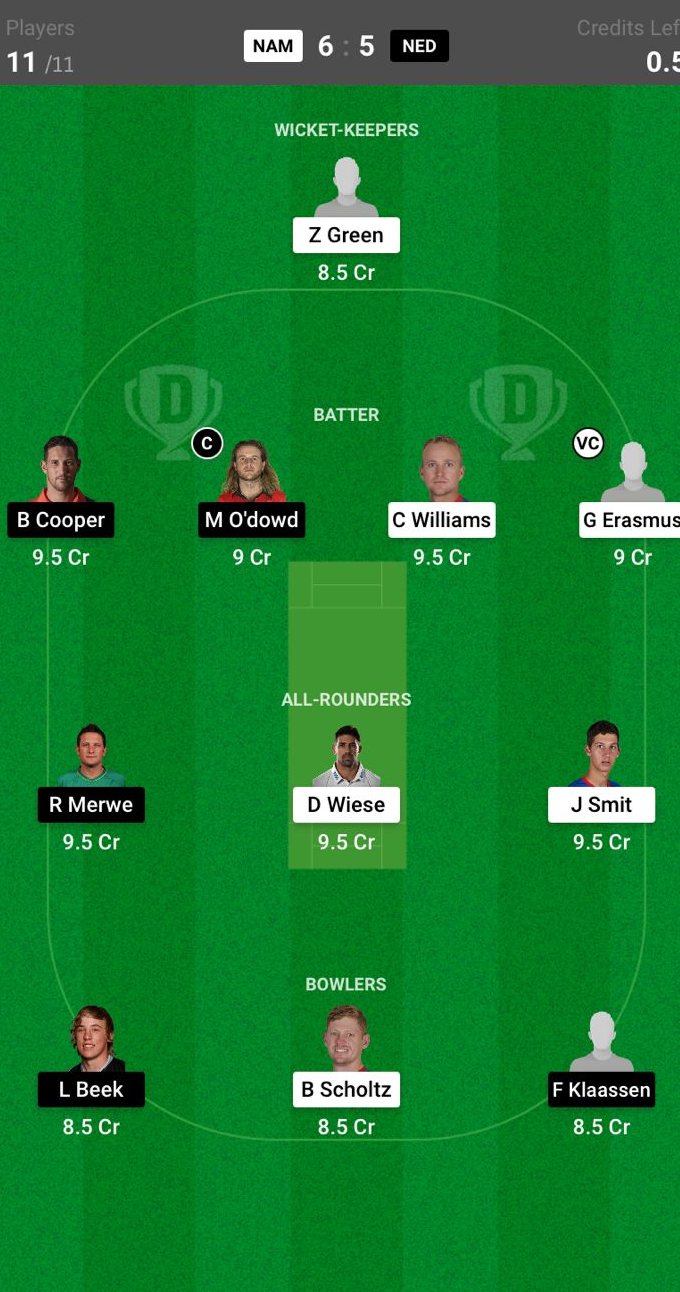 Max ODowd is a great choice to have as your skipper. He scored a half-century in the last game and will once again have the responsibility of giving a good start to the side.

As for vice-captaincy, C Williams could be a decent pick. R Merwe is also a safe bet, given his ability to contribute with both bat and ball.