The fourth night of the Premier League Darts campaign sees the eight players heading to Exeter for what is the regular stop off in this competition prior to the UK Open. As with the opening three evenings, another £10,000 is up for grabs on Thursday evening.

The league table is beginning to take shape now after three nights of action so all eight will be desperate to not only win their quarter finals but also press on and claim the five points for winning the evening.

A really good evening in Exeter gets off to an excellent start and doesn’t really slow down from there. The opening match sees the defending champion Jonny Clayton looking to continue his good start to his title defence when he meets Michael van Gerwen, who is chomping at the bit to find some consistency at the top level.

Clayton has been in good form for a while now and he’ll know this is one of the evenings when he has ‘home’ advantage in that he’ll have the throw for as long as he is in play across the night. That hasn’t already meant something but it is still a nice thing to have. Van Gerwen knows he has to break throw in this match. His campaign has been a strange one so far. He has either been brilliant or found wanting and nothing in between and that makes his matches tough to beat on. I’m happy enough to leave this one alone.

The second match of the evening sees Michael Smith looking to get off the mark for his season when he takes on the man of the moment Joe Cullen, who made the final in the second week of the event and will be looking to replicate that form here.

I wouldn’t say there is a need for Smith to panic just yet. The change in format means that he is still well in the hunt this term whereas in seasons gone by he would be under pressure for points ahead of Judgement Night which is a thing of the past now. That should assist in him beating Cullen who didn’t do a whole lot wrong in the European Tour event at the weekend but for who missed doubles come along far too often. To be fair they do for Smith too but his scoring power should earn him more chances. This isn’t a match I want to get involved in either though.

The third match of the night sees the last two world champions going at it in a battle of the top two in the world rankings when Gerwyn Price meets Peter Wright in what will be a very quick repeat of the International Darts Open final.

This should be a cracker of a contest. Both these men have won one of the weekly nights so far so they are in a decent position in the table. Price made history a couple of weeks ago when he made two nine darters while Wright was brilliant on the opening night. He has been a bit up and down since then though and has won just one of his three Premier League matches since the opening night. Wright did come back to form when he made the final in Riesa but he didn’t average 100 until Price forced him to in the final. That was their second final of the season. Wright won the other on the floor but I sense Price will have the upper hand here, especially with the throw. Going back to 2018 when Price became relevant in the game he leads 9-3 in televised meetings with Wright but at 8/11 he’s a tight price to win here.

The last of the quarter finals on evening four of the competition sees James Wade looking to build on a decent week when he takes on a Gary Anderson who is still trying to get going this season and who will be looking to use a relative home advantage to his benefit.

Wade made the final of the last Premier League evening where he ran into Gerwyn Price who was playing like a lunatic on that particular night but it is a much stronger showing than what Anderson has achieved. He won his first Premier League outing this season but lost the semi-final and he has lost both quarter finals since then so you would have to make Wade a favourite here, particularly as he kept up competitive reps in Germany at the weekend when Anderson was watching on. Whether Wade can progress through the evening remains to be seen but there is no reason he can’t pick up another two points for a quarter final win here. 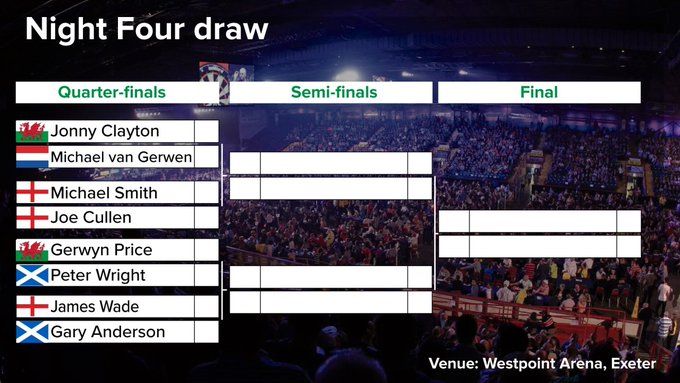 I’ve kept my powder dry in the tournament betting for the evening for the first three weeks to see if there are any trends we can feast upon. The truth is there hasn’t really been. The first evening was won from the third quarter final, night two was won from the second quarter and the last night was won from the opening quarter final. I do think there is some mileage in coming in one of the first two quarter finals. That provides some proper rest time between matches and it means whoever wins that first semi-final has the throw in the final. Two of the three finals have been won with the throw.

That means I’m happy to focus on the early part of the draw for a bet on the evening which gives us Jonny Clayton, the night two winner, Michael van Gerwen, Michael Smith and Joe Cullen and it is Smith I like the look of at 9/1. Smith looks to be coming into his usual form again. I think we can allow him a slow start to the year as he would have needed time to recover from that heart-breaking loss in the world final. He is yet to win a match in the Premier League but he averaged over 103 in defeat to Price in Belfast last time out and replicated that in the European Tour at the weekend before losing to Wright in a deciding leg. Wright might just have the Indian sign on him at the minute. Smith begins with a ‘home’ match against Cullen and although he would need to win against the throw against either Clayton or MVG in the semi-final, were he to do that he would have the throw in the final. I think at 9/1 we can get on Bully Boy to enjoy top spot in Exeter.