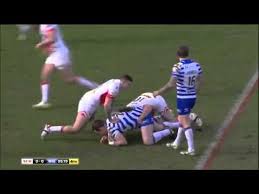 The Super League continues on Friday night with two matches which could really shape the remainder of the season in the race for the play-offs and the battle to avoid the drop. It is hard to see how this won’t be a pivotal evening for those involved.

As always on a Friday night we have one of the two matches on TV for us to enjoy but there won’t be no updates from the other one as it kicks off two hours before the live game so social media updates will be needed to keep on top of that one. We’ll begin the preview with the TV game even though it kicks off later.

One of the bigger Yorkshire derbies in years between the Castleford Tigers and Wakefield Trinity takes place at The Jungle on Friday night when the home side look to consolidate their place in the play-offs, while Super League survival is on the line for the visitors.

Wakefield dropped to the bottom of the table recently and desperately need to find a couple of wins from somewhere to ease their relegation fears. With Toulouse playing earlier in the night it might be that they are two points and point difference behind the French outfit in the race to avoid the drop so they could really do with ending a horrible 17-match winless streak against their local rivals. Castleford have caught fire in recent times and look secured in the play-off places now and are chasing down the two sides above them in the hope of getting a home match in the first round of the postseason. They have piled up the points on Warrington and Hull FC in recent times and will hope to do likewise here, although the head injury that keeps Gareth O’Brien out is going to cause a reshuffle. I still think Castleford will have enough to win here but Wakefield aren’t going down without a fight. They took St Helens to extra time last week and probably should have beaten Hull KR the week before. They only conceded 13 to Saints and 15 to Hull KR so there is enough defensive solidity to suggest that if they can get at a Tigers defence that is averaging 20 points against in their last three matches, they can stay within 14 points even if they can’t end this hoodoo against Castleford.

The match away from the cameras on Friday night is massive for both the teams involved as Toulouse Olympique look to continue their push for Super League survival when they host a Hull FC side who are seeing their play-off hopes fade fast for a second season in a row.

Injuries are accounting for the poor form of Hull FC but their defensive displays in recent weeks are bordering on pathetic and unless there is a dramatic improvement then this will only end one way – they’ll miss the top six again and Brett Hodgson will be no more in terms of coach of the side. Toulouse are going in the opposite direction and three straight wins lifted them off the bottom of the table, although they were beaten by Salford last week which might have halted all of their momentum. I mentioned last week how I’m reluctant to take Toulouse at odds on and although Hull look in absolute disarray there will be a performance in them soon purely out of desperation. I’d expect the home side to win but at the prices I can let them do it.