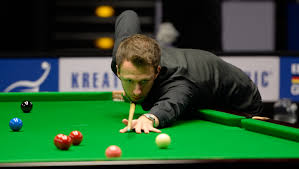 The Welsh Open semi-finals will take place on Saturday when the four remaining men will battle it out over the best of 11 frames to determine who goes into the final on Sunday to play for the Ray Reardon Trophy.

We have an emphatic favourite to win the tournament from here on in but three men are hungry to deny that from happening so we should be in for a tasty day of snooker beginning in the afternoon and ending in the evening.

The opening semi-final of the tournament sees two men who have lifted trophies already this season battling it out when the Shootout champion Hossein Vafaei meets the man who took down the Champion of Champions in Judd Trump.

These two met here last year and it was Vafaei who came out on top in an earlier round and I’m sure Trump won’t need reminding that he has never got his hands on this title in his career. Both those facts are likely to add extra motivation to the former world number one here but whether he is in the form to go on and win this tournament is unsure. His win over Neil Robertson in the quarter final was obviously appealing but at the same time the Australian was visibly struggling with the news his hero had passed away. I said of Vafaei going into his quarter final match that he doesn’t inspire me as a favourite and at 4-1 down to Zhang Anda we saw just why but he deserves credit for turning it round and probably feels he is free rolling in this semi-final now. I don’t think he’s without a chance but if Judd turns up I think he wins. I’ll tentatively sit this one out.

Two men who were having pretty ordinary campaigns when they arrived in Newport this week meet in the second semi-final when Joe Perry and Jack Lisowski have a massive chance to make another major final and resurrect their indifferent season so far.

I have to say to this point Perry has been the best player in the tournament for me but for three frames in his quarter final win over Ali Carter, Lisowski was just flawless and unplayable so this should be a really good semi-final to watch. I wouldn’t be surprised to see Perry win this but having been gubbed by Lisowski from a winning position on Friday I’m not rushing to take him on again. These two have a history of close matches though and this one might not be an exception given what is on it and everything. Both players will know what an opportunity they have in front of them so they’ll be giving their all here. I like this one to end 6-4 or 6-5 either way so over 9.5 frames looks good enough to me.