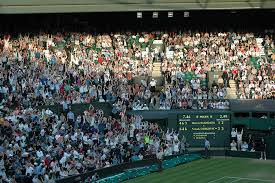 It is the semi-final day for the women at Wimbledon on Thursday afternoon with both matches taking place on the Centre Court as we get set to find out who will play for the famous trophy on Saturday.

We have had a number of shocks and surprises in the women’s draw this year but despite that we have one of the leading players of the season made it through as well as a former champion and a rising star so we’re set for a great day of tennis.

The opening semi-final of the day looks set to be an entertaining one when the extremely likeable Ons Jabeur and Tatjana Maria meet with a place in a first Grand Slam final the reward awaiting whoever comes out as the winner.

Jabeur is second only to Iga Swiatek in terms of wins this season and she is an emphatic favourite to pick up another here, against a woman who she classes as a good friend. The Maria story is a brilliant one. Here she is in the latter stages of her career if not the twilight of it, who a year ago was giving birth to a second child but is still able to have a truly deserved day in the sun on a huge show court for what is a major occasion. These two both play with plenty of creativity and a watchable style. I think Jabeur will do everything that little bit too much for Maria but to be fair to the German she has fought like a tiger to get this far and I don’t expect her to roll over here. This is very much a semi-final to enjoy rather than bet on.

The second semi-final looks the pick of the matches on Thursday afternoon as the big hitting Elena Rybakina bids for a place in a maiden Grand Slam final when she meets the 2019 champion of this event in Simona Halep.

This is very much a clash in styles. We have the big serving, heavy hitting but perhaps not quite as light on her feet Rybakina against the ultimate master defender Halep but the Romanian has transformed defence into offense incredibly well so far in this tournament. The big issue Rybakina has here, apart from a lack of experience at this level of a major tournament, is that Halep has played three big or clean hitters in this tournament, beaten them all without conceding a set and has made single digits for unforced errors on each occasion. Simply put, she enjoys the pace on the ball her opponent gives her and uses her defensive skills to get an extra ball back and wait for the error to arrive. It will be interesting to see if Rybakina has anything different in her game to mix it up a little. To be fair to the Kazakh, she has taken a set off Halep in their last two meetings but both were on a quick hard court where her serve came through the court. It might not be as easy for her here and with the way the Romanian is playing I think Halep will have too much and continue her run of winning without dropping a set.