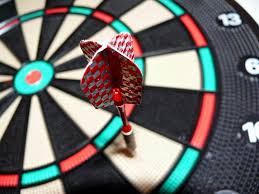 The semi-final line up at the World Matchplay will be finalised on Friday evening when the last two quarter finals will be played out inside the Winter Gardens in Blackpool on a night where four of the best in the game look to keep their title hopes alive.

Incredibly none of the four players on show on Friday evening have been to the last four of this tournament so two of them will tread new territory and set up a meeting on Saturday for a place in the final of this famous event.

The opening match of the two on Friday evening sees the two members of the Netherlands’ team at the recent World Cup meeting when Dirk van Duijvenbode takes on our pre-tournament outright pick Danny Noppert.

Dirk has seen off a couple of very heavy scorers in this tournament so far in Ryan Searle and Michael Smith but I’ve sensed he has been under pressure a lot of this week. That has largely been of his own making because he started off terribly slowly against Ryan Searle but recovered to win and then was the beneficiary of Michael Smith starting awfully and then being unable to finish his dinner. I think it is fair to say he meets his toughest test of the week so far here in Noppert, a player who has cruised through against the Northern Irish pair of Brendan Dolan and Daryl Gurney, averaging over 100 in both matches, scoring well and finishing well. Noppert is doing little wrong at the minute as I highlighted before the week began. Some bookmakers seem unable to split these two but over this distance I’ve got to think the more emotionally balanced and solid darts of Noppert will lead him to victory over an opponent who is all or nothing with not much in between and who can start to beat himself if things begin to go wrong.

The last of the quarter finals sees the former world champion Gerwyn Price, who knows he will return to number one in the world rankings if he picks up a first Matchplay title this week, taking on a Jose de Sousa who has shown a timely return to form.

Price has come through two tough encounters with enough in hand to be comfortable this week but he could easily have got embroiled in a couple of awkward encounters had he not hit a few shots at the right time. We can assume he will get better here though. His record in an identical format at the Grand Slam would suggest that will be the case. He takes on a de Sousa who arrived here carrying no form whatsoever but who has looked a lot more like the player who won the Grand Slam himself a couple of years ago with his 180 scoring power returning to how we know it and no catastrophic mares on his doubles. If he can keep his finishing good here then he can challenge Price but over this distance I fancy he’ll get found out on the outer ring at some point so I think Price will win here but the potential number one spot and the fact he has never been beyond the last eight here is enough to leave me to watch this one without a bet.